It is with great sadness that GEA announces the passing of Walid Taha. Walid passed away in Berlin, Germany, on 25 January 2019, a week after his 56th birthday. He leaves behind a wife and four children.

Walid Taha worked closely with GEA since 2006, when the Segment GEA Refrigeration Technologies, represented by the company GRASSO in the Netherlands, embarked on a joint venture with ADEAREST. Walid Taha initiated the joint venture and was a member of the Board of Management, representing his company ADEAREST, which is a Taha Investment Group (TIG) company, specializing in refrigeration contracting and consultancy in the Middle East. 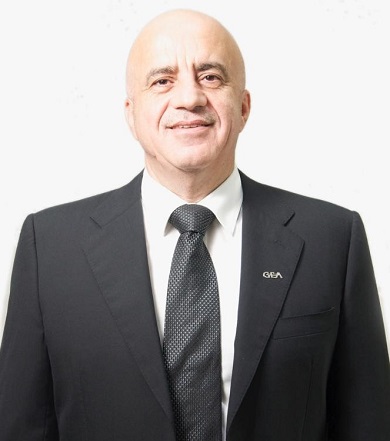 This joint venture was named GRADE Refrigeration LLC and has remained a 50-50 partnership between GEA and ADEAREST since its inception. GRADE started as a EUR 1.5 million market, and reached the target of EUR 45 million sales in 2016. Part of this was down to Walid’s vision and determination.

He was instrumental in GRADE becoming highly successful and, with his continued efforts, commitment and distinguished style of management, the company regularly exceeded its yearly targets. GRADE’s achievements would not have been possible without Walid’s appreciation of GEA’s values, which stemmed from his early association with GRASSO. As a GRADE Director and Member of the Board, his dedication and commitment became an inspiration to others.

Walid Taha was born on 17 January 1963 in Beirut, Lebanon. He was the second of three sons and his father was the founder of the TIG Ltd group of companies, Mr. Moussa Taha.

Walid gained a BSc (Hon) in Systems Science from City University in London, United Kingdom. Furthermore, he was a Member of the British Institute of Refrigeration, as well as the International Institute of Ammonia Refrigeration.

Immediately after completing his studies, Walid immersed himself in the family business. At the age of just 23, he found himself learning the ins and outs of what was then an established yet humble family business, ADEAREST. Walid started to develop a keen interest in refrigeration, and in 1989 established a distinguished relationship with GRASSO Netherlands.

Little did anyone know that a seed had been planted for what was to come.

Walid was a true gentleman, a man of integrity with a down-to-earth personality and remarkable decision-making capability. He was known for being kind, humble, soft-spoken and courteous. He treated everyone respectfully and equally.

Walid’s contributions continue to serve as inspiration for GRADE management and staff to pursue the goals and vision he established. The challenges he instilled in those he worked with, particularly in GRADE, will continue to flourish. We shall always remember him as the true visionary of GRADE who inspired us all to greater heights.